Does it make me weird that Halloween is one of my favorite days of the year?  I love a day dedicated to fun and adventure and pretending to be someone else.  There’s no pressure of producing a big meal for lots of people.  There’s no pressure of finding just the right gift.  How fun it is to be someone else for a day (or evening)!?!  And even if I don’t dress up, I absolutely LOVE handing out candy to supermen and spidermen, and cowboys and princesses and the occasional ghosts and goblins.

I have been told ghost stories my entire life.  Some of my favorite memories are of listening to my Mama’s mother telling ghost stories…and she knew a lot of them!  While I don’t believe in ghosts, I love that little tingle up my spine when I hear a good ghost story.  Here’s one of my favorites:

My great-grandparents lived in a house up in Tennessee that sat up off the ground on rock pillars.  You remember the kind of house…where on hot, southern summer afternoons, you could scoot up under the house and lie down in the cool dirt underneath.  It made the perfect playhouse, the perfect hideout, the perfect napping place.

My great-grandfather got fed up with this annoying light, so he hatched a plan.  He decided he would shoot that light and do away with it once and for all.  He waited as the evening progressed.  Finally, the light began to make its rounds.  It rolled out from under the house, around the well, and as it rolled he took aim with his shotgun and fired.  The shot was good and that light flew into a million little pieces.  But the little pieces kept rolling and rolling and rolling until they rolled back together into a solid light the size of a man’s pocket handkerchief once again.

One of my favorite Halloween treats doesn’t have a name that I know of.  It is wonderful, delicious and yummy.  It tastes like a Payday candy bar.  With chocolate.  What could be better?

All you do is mix a bag of candy corn, salted peanuts and a bag of M&M’s in a bowl.  Amounts are up to you.  If I make this, I have to have company over because I will eat the WHOLE thing.  And that’s something I don’t need to do! 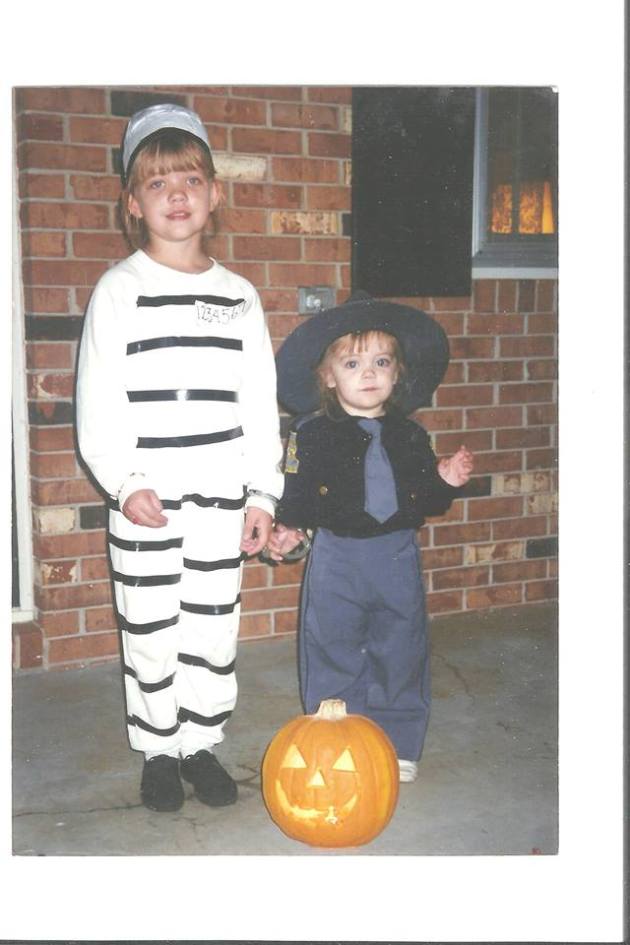 My very, very, very favorite picture of Emily and Erin at Halloween.  This was taken about 16 years ago.  Erin is an Alabama State Trooper (just like her granddaddy—that’s his hat she has on), and Emily is handcuffed to her as her prisoner.